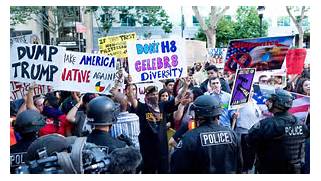 If the MSM “fake news” wasn’t enough, now we must deal with what I will refer to as the “Fake Social Justice Warriors” (FSJWs). The news and streets are full of them these days. They are also increasingly present ranting and raving on social media about America’s bigotry, systemic racism; how lousy America is and bad-mouthing our President Donald J. Trump. It appears to be mostly a “Millennium Generation” Cause de Celebrex. People who haven’t done and can’t do, with no “skin in the game,” criticizing our group which I refer to as Hard-working, Country-serving, Tax-paying, American Patriots (HCTAPs).

Case in point, today while perusing LinkedIn, which is one of my favorite professional social media sites, I followed a discussion where HCTAPs were berating self-absorbed, over-paid NFL players who ‘take a knee’ during the playing of our national anthem. I read an opposing comment by a woman I will only refer to as “Diana” who chided those complaining about the lack of respect for American values and our flag shown by these athletes. Diana wrote that she couldn’t believe that people were so upset about the players attitude. She called them “pathetic hypocrites,” adding that they don’t get upset when they see coaches and other athletes praying to God. It was embarrassingly obvious that Diana just didn’t “get it.”

I took Diana on in a private messaging sidebar and asked her to explain what was so bad about this country. Her response was that America is full of racist and bigoted people. As luck would have it, Diana had posted her personal profile on LinkedIn so I could see her background which was nothing at all unique nor exceptional. Diana sees herself as a “social justice” advocate. She sees professional athletes like Colin Kaepernick as the oppressed downtrodden and the HCTAPs as bigoted racists.

I challenged Diana with several background questions about her personal experience with bigotry and racism. Then I challenged her to tell me everything she had done and/or was doing to help the racially oppressed and socio-economically disenfranchised. I asked her about her volunteerism, her community and national service and how she was getting her hands dirty to help solve all of America’s alleged social and racial problems. The response I received from her was not at all surprising.

Diana admitted to me that she had never been the subject of racism or bigotry. She attended nice suburban elementary and high schools. She wasn’t from the “projects” and it appears from the cities she lived in that the closest she ever got to observing violent crime was watching re-runs of NYPD Blue on TV. Diana confided to me that she had never been involved in any type of volunteerism where she assisted those who claim to be disenfranchised in American society. She has never done any community service in violent and depressed inner-city neighborhoods. She has never done any municipal, state, national or military service. She never joined the Peace Corps or AmeriCorps to help other less fortunate nationally or internationally. She has only “donated money to charities.” In other words, Diana has no skin in the game. She’s just a complainer. How disengaged with American society is that? Just like the all-about-me, elite rich, socially disengaged Hollywood celebrities who always to want to get their social justice quote in the papers.

Diana is just one of a growing number of “Fake Social Justice Warriors” out there clamoring for whatever they define “social justice” to be. They are not doers or servers; they are just self-absorbed, hyper-critical, disengaged observers and complainers. They are bold on social media, but take no bold actions, sacrifices, or personal risks to rid America of its alleged bigotry and racism.

FSJWs march with signs, yell and scream and attack statues of Civil War personages, Revolutionary War patriots and Christopher Columbus – because statues don’t fight back. It’s a safe activity that provides a false impression to themselves and their friends that they are “doing something.” In other words, it’s fake; just like the fake news they create and write about.

FSJWs hide behind masks when they take to the streets to protest. They conceal their faces because they would never want their parents, relatives and friends to know that they have a dark, cowardly side. They conceal their identity like the truths they avoid about their pathetic, do-nothing personal lives. They commit acts of violence and oppression upon others who happen to disagree with their intolerant points of view. They harass, beat people and chase them off college campuses so any opposition to their intolerant, Marxist views cannot be heard. They are anti-First Amendment rights people. Many are the revival of Mussolini’s fascists and Hitler’s brown shirts.

Now I don’t believe at all that Diana is a fascist. In fact, she sounds like a nice person, albeit a bit uninformed and disengaged. But I can guarantee you just from what she has written in social media and in my private discussions with her that she sides more towards secular progressives and other FSJWs like Colin Kaepernick; than she does with the HCTAPs out there who have served their communities, served their nation, made personal sacrifices, and who love their country and pray to God each night.

Unlike poor Diana, nothing the HCTAPs have achieved for themselves, their families, their communities and our nation is fake. They are the “real deal” and deserve to be respected and not put down when they rightfully criticize those who continue to disrespect this great nation. Unlike Diana, these Americans have “skin in the game” and have earned that right.

You see, Diana, without truth and sacrifice, there is no justice – not even so-called ‘social justice.’

Ron Martinelli, Ph.D., is a nationally renowned forensic criminologist and law enforcement expert. Dr. Martinelli, is a retired police detective who directs the nation’s only Forensic Death Investigations Team, specializing in officer-involved death cases. He is the author of the book, “The Truth Behind the Black Lives Matter Movement and the War on Police,” (Amazon.com. His forensic site is found at: www.DrRonMartinelli.com.