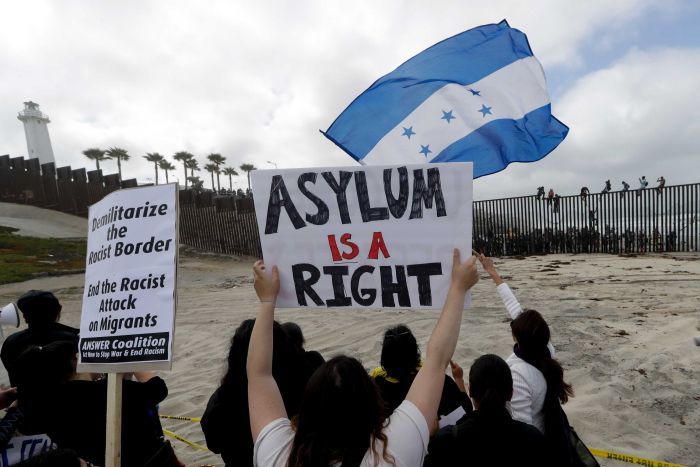 Disclaimer – The following is a fictional prediction only. However, everything you read is entirely possible based upon current, actual news reports and our nation’s recent political history.

They could hear them before they saw them. They came out of the pre-dawn tulle fog through the fields of the Otay Mesa near the city of San Diego by the thousands in any vehicle that could carry them. A phalanx of packed buses, rickety old commercial flat-bed and container trucks and pick-up trucks. The tip of their spear.

The Department of Homeland Security and its Border Patrol had been monitoring them for the past week as they transited Mexico; marching in two separate directions. One towards El Paso, Texas and this element towards San Diego. They now numbered over 75,000, primarily from Central America and Mexico. But now intelligence had identified hundreds in their rag-tag army from Indonesia, India, Somalia, the Middle East and MS-13 gangs.Guatemalan President Jimmy Morales reported that his country had captured 100 suspected ISIS this week and suspected that many more had joined the caravan. This was unexpected and a paradigm shift.

Our satellites, intelligence sources in Mexico and the mainstream news media programming had been tracking the bifurcated legions until last evening when the western element was approximately 100 miles south of the San Diego border. DHS and Border Patrol believed that the masses would not arrive at the U.S. border for three more days. They were wrong.

No one anticipated the clandestine stockpile of busses and other trucked commercial vehicles hidden away in warehouses and on side streets outside of Ensenada, and in the villages of Puerto Nuevo just off Mexican Highway 201 and in the Palm Valley of Highway 3.

During the evening and organized by flash mob cell phone text messaging, several thousand marchers were guided to the locations where busses and trucks had been sequestered. They boarded the buses and piled into commercial flatbed and cargo trucks. Others piled into retained private pick-up trucks and sedans. Yet more found Mexicans who willingly volunteered to drive them to the border so they too could join the masses.

On the U.S. side of the Mexican border, DHS, Border Patrol officials, San Diego County law enforcement mutual aid commanders and high ranking California National Guard officers were in a panic. Encrypted cell phone calls and texts messages from the hastily  established outposts along the U.S. side of the border from Tecate, the Otay Mesa and San Diego to Sacramento and Washington DC filled the airwaves with distressed voices requesting orders from their political overseers.

As the mechanized mass of would be occupiers slowly approached the Otay Mesa border crossing, they were met by a slim, fragmented and disorganized line of armed law enforcement officers and less than a thousand military personnel.

The leaders of the western element of marchers smiled when they saw the haphazard line of defenders on the U.S. border. This was not a serious effort to repel. It was pathetic they mused.

The buses, trucks and assorted vehicles with marchers pulled up within 400 yards of the border line and disgorged their occupants. Following behind this vehicle vanguard were men and women of all ages; families, and unaccompanied minors.

The leaders identified in blue reflective traffic vests with red armbands yelled out orders and quickly organized the marchers into pre-arranged groups of single adults and families. Then they began to move forward in a controlled mass.

The lead element comprised mostly of masked young adult males also wore reflective traffic vests, but theirs were lime green. They marched forward using the vehicles for cover; their arms linked together. Several carried the flags of their home nations. Honduras, El Salvador, Guatemala and Mexico. The women and children marched in step behind them; the children in front, almost as if being used as a shield.

As they marched, they chanted in Spanish, “Nosotros cruzaremos! Nosotros cruzeramos!” We will cross! We will cross! And “Estamos llegando, Trump!” We are coming, Trump!” It was an organized attempt at occupation, complete with battle flags and war cries. It looked like a scene from the movie The Alamo. It was surrealistic.

News journalists imbedded with the marchers quickly moved to the front of the line with their camera and sound crews as news drones were released aloft to capture the stand-off for national and international television.

Stalling for time; pre-appointed political and law enforcement negotiators from the State Department and Border Patrol moved to the 12 foot iron barred “wall” separating the U.S. from Mexico. They called out for the leaders of the march to identify themselves and come forward to parley. In response, three blue vested men came forward to meet the Americans, as scores of journalists and their camera crews moved into capture the negotiation and news drones hovered overhead.

“You cannot come over our border. We are a sovereign country and we will not allow it. There are other legal ways to make your requests for asylum known.” Said the State department representative.

“We are coming across for freedom,” said the leaders’ spokesman.

“We will stop you. Your people will get hurt; perhaps killed if you persist. Stop this now and no one will get hurt,” interrupted the California National Guard general.

“Yes, perhaps some of us will be injured or even die today; but I seriously doubt that. California is a sanctuary state and San Diego County is a sanctuary jurisdiction as well. So we will see soon enough,” replied the leader in nearly perfect English.

The leaders knew the Americans were trying to buy time and their plan called for denying them that time. Without saying another word, he turned away from the American negotiators and began walking back to the first line of marchers with his two colleagues in tow.

The leader walked up to the first man he found holding a Honduran flag. He took the flag from the marcher, did an about face with his back now facing the Americans and walked half the distance between the army of marchers and the border wall. Then he turned back to face the marchers, raised up the flag so all could see it. He waved the flag back and forth and yelled out, “Adelante! Reenviar a la libertad, amigos!” Forward to freedom, my friends!” And on command, thousands of the marchers moved steadily forward towards the wall.

“Oh shit!” a very nervous soldier was heard to exclaim.

And just like that, the dye was cast. By the thousands, the marchers surged towards the wall. Ladders were quickly brought up from the rear and placed against the bars that formed the “wall.”

The law enforcement officers and soldiers immediately responded with less lethal weaponry in the form of chemical agents, pepper spray foggers, pepper balls, less lethal flash-bang munitions, and even TASER claymore-type electrical darts. A small number of the first wave of wall scalers were struck and fell, but they were quickly pulled out of the way and replaced. Forward the lines marched and more began climbing up and over the metal bars.

The officers and soldiers soon ran out of munitions. Their commanders knew they wouldn’t respond with lethal force and it was clear they were vastly outnumbered by the army of illegal immigrants who were quickly breaching the border wall.

Simultaneously, the general in command of the California National Guard and the commander of the San Diego County mutual aid police element received orders from Governor Jerry Brown, the Mayor of San Diego and the County Sheriff to “Stand down” and pull back without any further use of force except as needed to protect the public from injury.”

In less than thirty minutes it was done. For the first time in its recent history, the United States of America was successfully invaded by foreigners and this time without even one shot being fired in our nation’s defense.

Ron Martinelli, Ph.D., is a nationally renowned forensic criminologist, a retired police detective and a columnist for the AmericaOutLoud radio network. His articles are also found on his forensic site http://www.drronmartinelli.com.